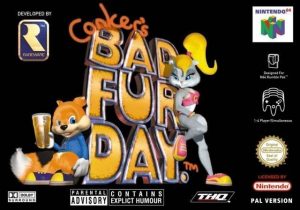 Another product from the renowned Rare publisher. Conker’s Bad Fur Day is a game released for Nintendo 64, under the category of platform games. The game is a part of the Conker series, supporting both single-player and multiplayer modes. The world you are about to experience is set in a three-dimensional space.

The main story of this version is about a squirrel named Conker. After a fun time with his friends, the squirrel tries to return to his girlfriend’s house. There’s nothing more to say when it just stops there, but the trouble occurs when Panther King, after losing one of his table legs, wanted to catch a random red squirrel to replace it. On the way home, because of collecting coins appearing scattered on the road, Conker got lost. Since then, new problems have arisen.

The game’s main gameplay revolves around solving puzzles, doing tasks like racing, defeating monsters, finding objects, and more. These quests are actually meant to help the friends that the squirrel meets on the road. What a nice squirrel! In return, Conker will receive rewards to move to new areas. This squirrel can jump, run, swim, climb, or even hit with a frying pan. In addition, there will be other special things that Conker can do, such as turning into a slam, shooting a slingshot or throwing a knife. These actions can only be used in each respective case in situations by pressing the B button. If the energy source is getting weaker, feed the chocolate to the squirrel, then he’ll get well soon.

Besides, the multiplayer mode will bring relaxing moments for you and your friends. Number four is the number of the maximum players that the game supports. In this mode, there will be many different minigames that typically are Beach, Heist, Race, Deathmatch (not only stop there). In Beach, one player will prevent the other three players from getting into a car to escape at the seaside. Heist requires the player to carry out a bank robbery without being arrested. The race between friends will take place in Race mode. Deathmatch is probably the most desirable one, as it is a third-person shooter game, specifically can be customized for each individual requirement.