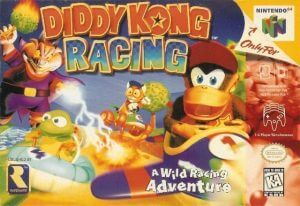 Diddy Kong Racing is a game developed and published by Rare for Nintendo 64 devices. The main concept of the game, as mentioned in the name, revolves around the fascinating car races on Timber Island. Diddy Kong seemed to be a familiar character when he is Donkey Kong’s sidekick, having appeared together many times in the Donkey Kong series. The game belongs to the Kart Racing genre, which is usually being mentioned for games such as the Mario Kart series.

The story begins when a wizard pig named Wizpig appeared after Diddy Kong and his friends wanted to organize a race tournament. He wanted to acquire all the tracks on Timber Island, so he somehow turned the four heroes who are the Island’s guardians into his servants. In order to defeat Wizpig, and maintain the peace of the whole island, Diddy Kong must defeat Wizpig on the races. Not only by car but also by hovercrafts, and even aeroplanes. But the player must be very careful, one of the island’s most veteran racers, Dumstick the Rooster, was turned into a frog when it failed under Wizpig’s hands.

At the beginning of the game, the player will choose for themselves a character of all ten characters. Of those, eight characters are available initially and two must be through the unlocking process. On the racetrack, players will control exactly one vehicle for all tracks. Meanwhile, water or air racing will have to go through two means, a hovercraft and an aeroplane, respectively. Throughout the race, there will be balloons and bananas appearing scattered. In terms of balloons, each one will represent different abilities, reds to attack, blues to accelerate, yellows to defend, greens to slow down, while rainbows will shorten the distance from you to the nearest racer. If multiple balls of the same color are picked up, each corresponding ability will be strengthened even more. As for bananas, when collecting ten fruits, the speed of the player will also be somewhat increased. If the player is attacked, two bananas will be deducted for each. If successful in defeating Wizpig in Future Fun Land, players will be transferred to a new mode called Adventure 2. In addition, there are three other game modes: a deathmatch, a chess collection mode, and an egg collecting mode.