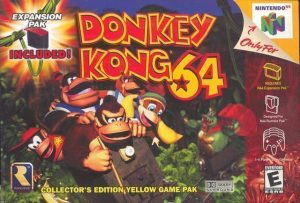 “Donkey Kong 64” is a game of the Donkey Kong series, specially designed for Nintendo 64. The game was developed by a leading UK developer, Rare, and released by Nintendo. Adventure genre, a platformer, support for both single-player and multiplayer modes are words that summarize the key features of Donkey Kong 64.

The unique feature that makes this version different from its predecessors is that the graphics have been upgraded to 3D format. This is also a milestone marking an important step, when Donkey Kong 64 is the first game to own this feature, paving the way for later versions. Donkey Kong, at first sight, there may be many people mistakenly think that this is a story of a donkey. However, the main character of the game is an extremely mischievous and kind Gorilla. It tells of adventures on a deserted island, in which Donkey Kong will have to go rescue his friends. This is because the evil King K. Rool has kidnapped Kong’s innocent friends, in order to serve the purpose of his hegemony. No one else, Kong will be the one to help his friends and destroy the villain’s fantasy dream.

In single-player mode, initially, Donkey Kong is the only character that can be chosen to play. But later, all four of this guy’s friends can be selected to continue the journey. Of course, each of them will have a unique ability and stats, including Chunky Kong, Tiny Kong, Diddy Kong, and Lanky Kong. The necessary condition is that the character must be rescued from King K. Rool first.

The missions throughout the game are to collect objects or bananas. These items can be collected in puzzles or in minigames. The normal bananas, depending on the character you choose to display different colors, after being picked up, will help players participate in battles with monsters. Meanwhile, the golden bananas will be the key to opening up other worlds in the game.
Multiplayer mode will allow up to four players at once. The deathmatch games or the last man standing games promise to bring friends the most relaxing and comfortable moments.