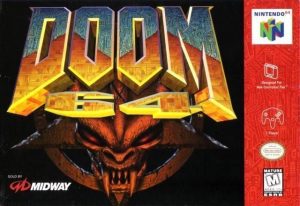 If you are looking for a first-person shooter game, or want to go through battles specifically designed for only one player, then Doom 64 will be such a good idea. The game was developed and published by Midway Games for the Nintendo 64 platform. This section is the successor to Doom II: Hell on Earth. The game has brought resounding success to the company. Therefore, Midway Games is planning to release a remake in 2020, for Microsoft Windows, Nintendo Switch, PlayStation 4, and of course, Xbox One.

As the sequel to Doom II: Hell on Earth, this Doom story will follow the previous ending. The survivor of the great war in hell has returned to Earth. This sole Marine has brought with him the message that the devils still exists in Phobos and Deimos, an abandoned complex.
When starting the game for the first time, the player can see a summary that has been brought. It is like a letter to the next generations, briefly talking about what happened in the past and the present context. The ultimate quest is set, which still revolves around the battle with the monsters. A radioactive incident has occurred, making these monsters stronger than ever. The survivor who returns from hell also is the main character that you have to incarnate.

The gameplay of an FPS game seems too familiar to talk about in detail. However, the main styles that the game promises will create anxious and thrilling moments. Throughout the game, there will be 32 levels that require the player to fight the devil, in addition to other small tasks such as collecting keys and weapons. There will be countless kinds of deadly traps, so players must be very careful while finding the way out through the switches. In this version, the arsenal is not much changed. Most of them remain the same as those of the Doom II, except for one, “Unmaker.” Unmaker is a demon-made weapon, also known as Laser. Its power can be increased throughout the game. It can fire three rays simultaneously due to the integration of “Demon Keys” that players find earlier.
The game brings extremely attractive and engaging sound, even a little scary tone, just like the devil colors.