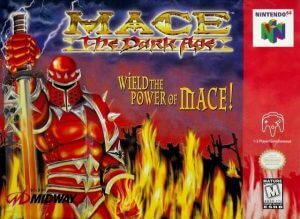 
Mace: The Dark Age is a product of Atari Games, produced for Arcade machines. However, this version was later remade by Midway Games for the Nintendo 64 platform. The game belongs to the fighting genre, in which players will have to perform solo matches against each other. These opponents can be controlled by the machine’s AI or can be controlled by the real person through the multiplayer mode. Starting the game, the player must choose for themselves one of the characters. The number of characters in the game is assessed to be quite diverse. Initially, only nine main characters could be chosen to play. However, the player can double this number by unlocking mysterious characters. The context of the game is set in an ancient period with a timeline of the 12th century years. In it, Asmodeus is a practitioner of dark magic and is also the holder of Mace of Tanis – a powerful item. It can bring unrivaled power along with everlasting energy to its owner. Realizing that Asmodeus was plotting a dark plan, they sent the most elite warriors to come and exterminate him before everything broke.

Zelda No Densetsu – Mujura No Kamen