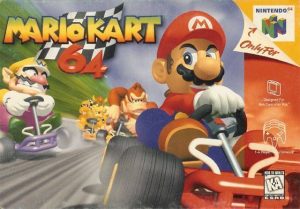 “Super Mario Kart” seems to have paved the way for the whole Kart Racing series (or Cart Racing) successfully. And following that success, four years later, Nintendo went on to launch the “Mario Kart 64” successor to the Nintendo 64. The biggest difference compared to the previous version probably is the graphics when there will be no more pixels. Instead, the paths and characters will be formatted in 3D.

Still exploring the theme of the characters in the Mushroom Kingdom, the game consists of all eight characters that you can pick right from the beginning, without having to go through an unlocking process or something like that. These eight characters are Mario, Luigi, Princess Peach, Bowser, Yoshi, Toad, and Wario and Donkey Kong with the replace of Koopa Troopa and Donkey Kong Jr. in the old version. To bring the challenging element, these eight characters will be of different weight classes: lightweights, middleweights, and heavyweights. Each weight class will have different strengths and weaknesses, requiring players to know how to take advantage of the good aspects of their characters.

The game supports two game modes: single-player mode and multiplayer mode which are more specific, namely Grand Prix, Time Trial, Versus and Battle. Time Trial, Versus, and Battle are the three-game modes that support only single-player or multiplayer method, while the Grand Prix is ​​a mode that integrates both of these play modes. By starting the game, the player becomes one of the greatest riders in the Mushroom World, with the character depends on the earlier choice. Participating in the race, you will have to complete the goals that each mode set. For example, for Grand Pix, you will have to go through 3 laps per race with different hardness options; Time Trial has a core element of time, often used to set records; Versus involves solo fighting, or fighting with one another; and for Battle, the use of items to eliminate the players you play is primarily.

There will be different types of support items scattered on the tracks, so don’t forget to collect them. Regardless of any mode, players need to show their skills, create beautiful drifts to be the first to reach the finish line in the shortest time as possible.
If you are looking for a racing game that is neither too classic nor too modern, this is a gold choice that you should consider!