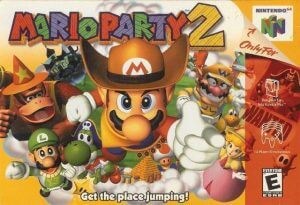 Mario Party 2 is the second game in the Mario Party series. The game comes from the developer Hudson Soft, published by Nintendo in the early year of the new millennium (2000), for Nintendo 64 devices. It seems that its title has revealed what needs to be said in this game: Still remains the characters from the Mushroom World: Mario, Luigi, Princess Peach, Yoshi, Wario, and even Donkey Kong; as well as Party, is the genre that the game is directed at, allowing many players to gather together to join the play. In addition to the main multiplayer mode, Mario Party 2 also has a single-player mode along with AI-controlled opponents.

The story this time of Mario and his friends, unfortunately, is an argument. Characters began to argue that who would be the right person to use his/her own name for the new world. While Mario wants to name Mario Land, Wario Land is the name Wario wants to take, Peach is still no exception when trying to impose the name Peach Land, and so on. While they are arguing intensely, Bowser has come and invaded this land. Only Koopa Troopa realized this. However, no one listened to him at all. Toad came up with the idea that whoever wins in defeating Bowser will be given the name of this new land at will. Fortunately, everyone agreed on that idea. The fight for Bowser Island took place once again.

The game originally had five maps, respectively: Horror Land, Mystery Land, Pirate Land, Space Land, and Western Land. Bowser Land is the final map, which will be unlocked after the player completes the previous sections. At the beginning of each game, the player will choose 20, 35, or 50 turns. The maximum number of players that can be played is 4, and a minimum of 1, meaning that the remaining players will be controlled by AI. Players take turns to roll the dice to determine the order of the turns. Overall, the mission of those players is to collect stars to get the most achievements. These stars will also be able to be purchased through the use of coins, earned in minigames, for example. The number of those is up to 64 with different organizational mechanisms. 1P vs 3P, 2P vs 2P, or solo matches against one another. There are even bets for jackpots (Battle mini-games) or matches for obtaining new support items (Item mini-games).