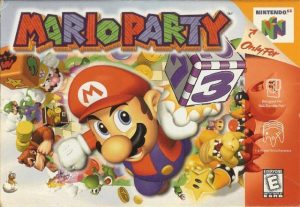 Mario Party is the first version to open the whole successes in the series of the same name. Coming to this name, players will probably be overwhelmed by the diversity in both features and modes, as well as component games. Mario Party is from developer Hudson Loft, brought to market by Nintendo for the Nintendo 64 platform. The game belongs to the Party genre, an indispensable game line in the fun. In addition to the core multiplayer mode, besides, the single-player mode will still be supported in this version.

The source of all the problems is probably from the debate from Mario and his friends. They quarreled and rejected opposing opinions because they all want to be recognized as Super Star. This controversy probably wouldn’t end until Toad, (Thank God!) has an idea that whoever gets the Warp Pipe in Mushroom Village will be recognized as the Super Star. The journey of friends from there began.

Mario, Luigi, Princess Peach, Yoshi, Wario and Donkey Kong are six characters that you can play. The game includes many separate features corresponding to each different building in the main interface, which is the Mushroom village. These buildings all have their own functions. One of them, Mini-Game House is where you can choose one of the whole minigames to play, and of course, that minigame must be unlocked first. The second building, Mushroom Shop, is a place for players to buy items. Mushroom Bank is a place to store gold coins. Mini-game Island is a land that only supports one player, in which the mission is to explore all the corners here. Finally, Option House is a place for you to customize the game settings.

The main mode of the game is probably Party Mode, with eight boards corresponding to each difficulty level. However, the last two will need to be unlocked by the player. Each table is created as a miniature model of real works. It is a forest, a cake, an island, a castle, or a star, for example. At the beginning of each game, the player starts by selecting the board, followed by the number of turns (20, 35, or 50 turns). Players take turns dumping dice to determine the number of hops. Each position the player jumps to will have different content. Maybe it’s to get extra or give away gold coins or maybe its require to complete a random minigame. This style of play is no different from real-life board games but is much richer and more transparent.