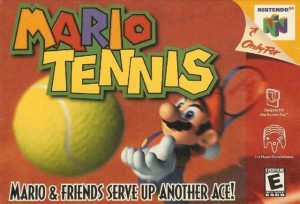 Mario Tennis is a sports game built on the inspiration of the characters in the Mushroom Kingdom, more specifically tennis. Tennis matches will be recreated in this name, including tournaments, where the main characters involved are Mario, Luigi, Troopa Koopa, or Donkey Kong, and other characters in the Another classic Mario game. If you are a fan of outdoor sports, and also a fan of these characters, then do not miss this game. The game is the second version of the series of the same name. Its launch is said to be the first leap forward when the game was designed in a modern graphic style. This version was developed by Camelot Software Planning and was published on the Nintendo 64 series by the Nintendo publisher. These classic tennis matches, of course, support both single-player mode (against machine AI) and multiplayer mode (play against machine AI or with your friends).

When participating in the game for the first time, players will see a short video, briefly introduce the context at that time, exactly is while all the characters were attending the Mario Star tournament. When four characters, Mario, Luigi, Wario, and Waluigi, were arguing, something suddenly glowed and landed on the field. No one else, it was Bowser and Boo. However, fortunately, the two characters came in peace, and they said they also wanted to join the tournament to win the trophy. Mario agreed and those who were surprised will start the fight right away, too.

Tennis matches have now become much more exciting since integrated into the game are twenty separate characters. They are divided into different classes with different strengths and weaknesses. When characters like Daisy, Peach are listed as Technique, Wario or Donkey Kong are listed as power. Speed and tricky classes are the other two. In particular, only Mario and Luigi are the two characters that neutralise all these factors. The four characters from GBC can be synced here, and vice versa. The rules of the matches in this game are no different from real life. The only thing that players need to learn and get used to is the implementation of techniques corresponding to the buttons. The game has up to seven game modes: Exhibition, Tournament, Special Tournaments, Ring Shot, Bowser Stage, Piranha Challenge, and Special Games. In particular, in the modes of the tournament, there will be trophy types.