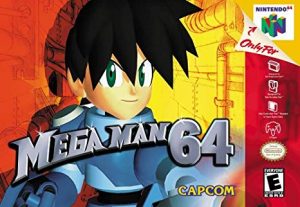 Mega Man Legends is an action-adventure game through first-person shooters. This version is the original version, paving the way for a series of Mega Man Legends titles later. Although the game was born in the 97s, however, it was not until 2000 that a port version for Nintendo 64 was released on the market. The name Mega Man 64 is often called to refer to this port version.

The story is a series of events about Mega Man with a more precise name is Mega Man Volnutt. He is a digger who goes through ancient traces, searching for the main source of energy of the people of this world, the refractive energies. Mother Lode is the main machine that is being sought by Mega Man and friends. It is supposed to bring an endless source of energy. On a journey to find new energies, their ship encountered Kattelox Islands and was damaged and stuck there. The Bonnes pirates come to plot to steal the mysterious treasure of this island. No one else, Mega Man will stand up to protect the island, looking for Mother Lode, at the same time. The mystery will gradually unfold from here.

Mega Man’s fights, as mentioned, will be the first-person shootings. His main task is to investigate the ruins or fight the Bonnes pirates. Use weapons to attack them, and avoid the damage they cause. The number of weapons the game brings is extremely diverse, each of them has its own indicators such as an attack, energy consumption, long-range, attack speed, and special abilities. These stats can be increased, provided that you have to pay for Roll. However, using and controlling weapons is not so difficult as they both have built-in automatic aiming capabilities, as in the game The Legend of Zelda: Ocarina of Time. Mega Man has a life-shield with a limited maximum level of damage. When damaged, Data, the monkey can come and fix it for him. However, if the damage is excessive and the shield does not have any energy left, Mega Man will lose his life and the game will end. Players will have to replay from the previously saved score.