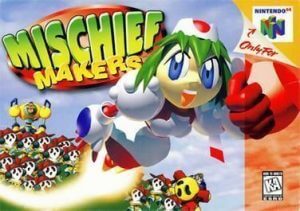 A platformer will be brought soon by the name of Mischief Makers. This game was developed by Treasure, and released by Nintendo for its Nintendo 64 devices. The game revolves around the story of the robot Marina, created by Professor Theo as a maid. However, don’t underestimate the power of this little girl. During this journey, the player will transform into Marina to rescue his own creator, after the event he was kidnapped by the emperor of Planet Clancer. The game has 2.5D graphics with 3D background. However, the characters are designed in 2D style and are played as a side-scrolling game. Marina can shake, grab, jump and land on enemies to attack, even throw opponents. The game takes place in five worlds with 52 levels with different missions set out. The task is simply to solve the puzzle, but there are also tasks that require Marina to defeat a certain boss. By shaking an object, it can turn into a sophisticated weapon or even a fighting machine. After completing the mission, a star will appear. Like the flag and the castle at the end of each classic Mario battle, the star will lead the player to a different scene or level.