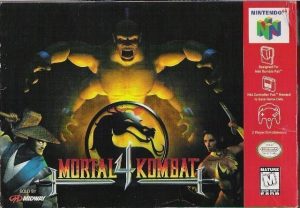 When mentioning about the fighting genre, Mortal Kombat 4 (MK4) is one of the names that cannot be ignored. This is the fourth installment of the Mortal Kombat series. Perhaps this name is too famous when it appears on many other platforms such as Arcade, Microsoft Windows, Nintendo 64, PlayStation, Game Boy Color and is widely known throughout the country. In the world. This article will talk about the version of the Nintendo 64 series, developed by Eurocom and published by Midway Games.

Legend has it that thousands of years ago, an ancient god named Shinnok had the plot to become the suzerain. However, the thunder god Raiden extinguished his illusory dream when he gave him a fight and then imprisoned him forever at Netherealm. It is unfortunate that wizard Quan Chi helped him escape from prison. Hatred in his heart, he was determined to return and take revenge on the gods. At the beginning of the plan, Edenia is the first place he aimed at. The traitor Tanya is now on his side. Shortly, Raiden will be the one to stand up and stop this threat. Earthrealm warriors will once again be the rear, supporting this mortal guy.

Although it possesses a 3D graphics, its gameplay is rated as that of classic 2D games and quite similar to its predecessors. Mortal Kombat 4 for the first time launched a complete weapons system, including melee weapons, ranged weapons, and magic weapons. The eight most well-regarded weapons among them are Kunai, Tarkatan Blades, Steel Fans, Hand Gun, War Fan, Scythe, Long Sword, and Bionic Arms. Integrated into the version is a fairly long list of characters that can be taken advantage of different abilities, such as ice, fire, thunder, … Each fighting scene will end when the opponent is completely defeated, maybe even a bit barbaric. Players can end their lives by boning, cremating, beheading through the use of the final skill when the opponent is weak.
Besides, MK4 also integrates “Maximum Damage”, which is a limited line. Damage combos that cause damage beyond that limit will automatically end. Throughout each match, only two Fatality moves and two Stage Fatality can be performed for each character and arena, respectively.