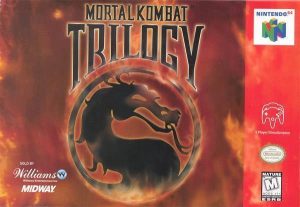 When talking about one of the leading fighting games, we probably have to mention the name Mortal Kombat Trilogy. Its success has been demonstrated when this version has up to seven versions for seven separate platforms. As for Nintendo 64, it was released by Midway Games and marketed by Williams Entertainment. It is described as a combination of Mortal Kombat 3 and Ultimate Mortal Kombat 3. Therefore, the characters from these two games will appear in the Mortal Kombat Trilogy version. Each stage will ask the player to choose one of the characters. Initially, only Rain and Noob Saibot did not require unlocking to play, and of course, the characters later will all have to go through such a process. The significant new feature in this version is an integrated Aggressor bar. When the Kombatants fight, this meter will be charged gradually. Once reaching the top, the ability of the character will be increased by a multiple, which in particular the movement speed and combat damage will be significantly improved. However, this process only takes a short time. 3-on-3 matches will be held for the first time here. The characters also have quite brutal finish moves.