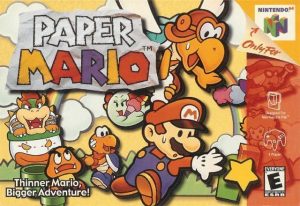 The story of Mario the plumber is the main concept tapped in this game. Mario is an in-game character that is famous for role-playing games. However, in this game, he will perform turn-based matches. Paper Mario is the first game of the Paper Mario series on the Nintendo 64 devices. The game comes from the Nintendo publisher.

As the name of Paper Mario, Mario or any other characters will all be designed just like a card made of paper. When controlling the movement back and forth, the images of these characters will turn over to suit the situation, which looks very funny, though. Meanwhile, the surroundings are mostly designed in 3D.

This story is still happening with the main characters Mario, Luigi, Peach, and the villain Bowser. Despite the appearances of both plumber brothers, Mario is the only playable character, while Luigi will stay to watch the house.
The context of this story is quite different when it takes place high above. Legend has it that there are seven stars guarding the Star Rod, a magic wand with a star on top, and also are the factors that govern the element of peace. It is a holy thing when it makes users’ countless wishes come true. Unfortunately, Bowser succeeded in stealing it with the help of his underling warlock, Kammy Koopa. At the same time, seven star-guards were imprisoned in seven cards and kept by him. Having the magic wand in hand, Bowser became unbeatable. On the eve of the Princess Peach party, Bowser lifted Peach’s castle to the sky and soon defeated Mario, then sent him flying down to earth. A journey to be the hero once again began.
By joining the game, you will control Mario to participate in the story-line tasks, through interactive scenes or conversations with the NPCs. They will provide you with the necessary information, guide you on the tasks that need to be done, and will also offer rewards that are essential items for the journey. The combat scenes in the game, as mentioned, follow the turn-based combat system. The player who plays Mario will take turns to fight against the monsters. The amount of damage caused by the action or the stamina can be increased through the use of in-game items.