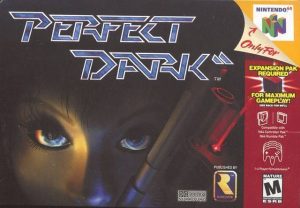 If you’ve ever known the name GoldenEye 007 with the appearance of agent James Bond, then this is also considered as a similar game. Perfect Dark is the first game of the Perfect Dark series from the renowned developer Rare. This version is published by Nintendo for Nintendo 64 devices. Perfect Dark is a first-person shooter, in which the player will have to move in the stealth way. Both single-player and multiplayer modes are supported in this version.

Although throughout the game are vital matches, the game still has a story to head for. Its context is set in the year of 2033 with interstellar conflict, more particularly is between the two races: Maians and Skedar. In it, the main character is Joanna Dark, also known as Perfect Dark since she had had an absolute-score. She is also an apprentice agent at Carrington Academy, a place connected with the Maians. DataDyne, meanwhile, is an arms trading conglomerate, specializing in illegal activities under the alliance with Skedar. Her first task is to investigate a suspicious plot of dataDyne. She discovered that this group along with Skedar was plotting to steal a megaweapon. The decline of the US president led to the conclusion that an artificial version of him was created. Naturally, this AI operates under the evil alliance. The main character will prevent that dark conspiracy by overcoming the campaigns that were set out.

In order, the tasks are numbered from 1 to 9. Then there will be a special mission, which can be considered as the highest task: Special Assignments. In particular, Area 51, a place that recently rocked the social media with the event “Storm Area 51, They Can’t Stop All of Us,” will also be brought to Campaign No. 5. Besides, integrated into the game is a huge arsenal. These weapons spread across many genres, from long-range weapons such as pistols, rifles, such as Falcon 2, Laser, Dragon, Super Dragon, eg, to close-combat weapons such as Combat Knife. If you are a passionate archer hero then Crossbow is a suitable weapon. In particular, timed explosive weapons are also included in the version in the name of Timed Mine. Multiplayer mode supports up to four players along with eight AI Bots.