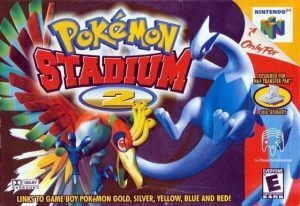 When seeing the name Pokémon Stadium 2, at first, obviously many gamers will immediately think of the Pokemon series from Japan. Followed by the success of Pokémon Stadium, Pokémon Stadium 2 is the sequel for Nintendo 64 devices. The game was produced and released by Nintendo. This version supports both single-player and multiplayer modes. The number of fighters has been increased to 251, 100 more, compared to its predecessor. A special thing here is that Pokemon from your Game Boy can be imported into this game.

Compared to other versions of Pokemon, this Stadium series does not have a clear plot. And so is this Stadium 2 version. The game points out that the player needs to win the battles taking place on the field in the White City. In the main Stadium mode, a tournament will be held again. There are 4 trophies that players need to achieve through turn-based battles. Besides, there will be Gym Leader Castle with Gyms and famous Pokemon species. Naturally, owning it will not be easy when the player needs to defeat the leaders here. At the same time, if successful in defeating the trainers, players will collect Gym badges. There are 8 trainers at all. After collecting all 8 badges, players will have the opportunity to challenge the Elite Four. If the player wins all four trophies as well as complete challenges at the Gym Leader Castle, then the player will be led to a worthy rival at the end of the match. By successfully defeating this character, the player will once again conquer the previous modes, but with a harder level.
In Challenge mode, later matches will occur with three of the six Pokemon, randomly chosen. Meanwhile, in other modes, the player will be allowed to pick up six mascots.

In addition to the mode mentioned above (the single-player mode), the game also integrates multi-player mode. The number of minigames in this version is not inferior to Pokemon Stadium in numbers up to twelve. Four is the highest number of players these games support. Free Battle mode is a training mode without any rules. In addition, Pokémon Red, Blue, Yellow, Gold, Silver, and Crystal are special versions that have been brought to Game Boy Tower.