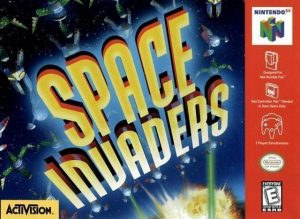 When it comes to one of the most popular Arcade games of the time, Space Invaders is a name that cannot be ignored. This game was born in the late 70s of the twentieth century. Tomohiro Nishikado is the developer of the loading capacity for producing such a legendary product. However, the original version that appeared on these console games only had a black and white interface. The game that this article refers to is a remake created for the Nintendo 64 platform, launched in 1999, with beautiful graphics and depth upgraded to 3D. In Japan, this version is also known as Space Invaders X. To bring the best experience to the players but at the same time retain the original colors, the game has inherited a few updates that breakthrough this version. The gameplay of the original hundred levels has been preserved. However, this setting is set in many planets, including Pluto, Saturn, Mars, and even the Earth. In addition, the new opponents you face are more than 14 alien races with bosses for the first time appeared with distinctive characteristics and combat abilities.