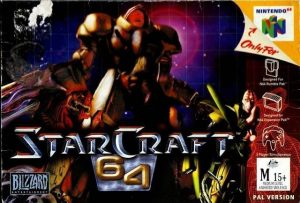 StarCraft is a name that is famous for the series of the same name. It belongs to the Real-time strategy category, developed by the name Blizzard Entertainment. Besides the Nintendo 64 platform mentioned in this article, the other versions are designed specifically for PC platforms, typically with Microsoft Windows and macOS operating systems. The name StarCraft 64 is also used to distinguish the version on the Nintendo 64 platform from the rest. Although it is just a port version, it still inherits all the tasks from the original, including confidential or extended tasks. In addition to the single-player feature, this version also supports multi-player mode. Throughout the game will be three separate races: the Protoss (a humanoid race, possessing great predictive ability), Zerg (shaped like an insect with the ability to superior adaptation), and Terran (a neutral species between the two species). However, the ability of their fight is that neither side dominates the other. This is also a factor that the game focuses on since it creates a balance between species. Participating in the game, players will be forced to attack the AI ​​through different settings, easy, medium, hard, and insane. There are a total of 30 missions in single-player mode.