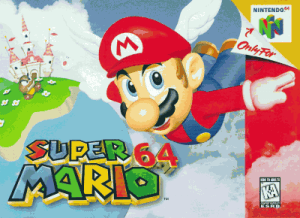 The childhood of most of us probably has the appearance of the plumber Mario, along with the familiar 2D interface in the Super Mario series. But with this version, Super Mario 64 has been improved and upgraded graphics format in a three-dimensional space. The game belongs to the platformer genre. If the other versions in this series have the participation of 4 main characters: Mario and Luigi brothers, Princess Peach, and the villain Bowser, then this version will not have the presence of Luigi with Multiplayer mode too. Honestly, just one Mario guy is more than enough. By joining the game, players will be able to enter the mushroom kingdom. However, it is no longer like the predecessor versions but become an open world. This has increased the challenge somewhat for the game, but also increased the fun, as well as the limitation when players can control the character to explore the kingdom without having to pay too much attention to the matter of time.

The game begins when Mario receives a letter from Princess Peach. The princess said that she wanted to invite Mario to eat pies made by her own hands. However, when he stepped into the palace, Mario discovered that Peach had been kidnapped. No one else, that was Bowser. The first steps for Mario to go deeper into the fight with the villain is to carry out small tasks. In this version, in addition to the usual skills like running and jumping, Mario has many more abilities, such as climbing, bending, punching, kicking, wall jumping or creating special jumps through the combination of buttons on the handle. The tasks that Mario has to do maybe collecting coins, stars, or destroy a certain boss. The plumber can find quests that the game sets through the pictures on the wall. These are also portals that teleport to battle areas. Whenever Mario jumps into these paintings, the game will lead him to the place where he needs to accomplish the goals that have been set. Stars are essential for Mario to be able to enter different rooms. Throughout the game, there will be three times Mario battles against Bowser. However, the first two are just stepping stones to increase the level of the game. After defeating Bowser a third time, Princess Peach will be rescued. The rewards for Mario is the pies that Peach promised to give earlier and a kiss on his nose.