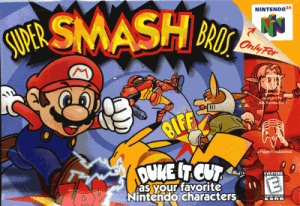 Super Smash Bros is a typical game from Nintendo. The first version was published only for the Nintendo 64 type (so it is called Super Smash Bros. 64 to avoid mistaking with the series of the same name), but the success was great enough that since its release, Nintendo has had to rethink and produce other descendants on more type of machines. The game belongs to the fighting genre.

Perhaps, the success of this version is large because it is a Crossover version when simultaneously, players can experience and let their favorite characters all stand in the ring. Therefore, it has attracted a large number of devotees of Nintendo’s games. Participating in this version includes twelve characters. They are all famous characters that gamers cannot ignore, famous in both the gaming world and animated films, such as Pikachu. Of those twelve characters, there are eight main ones that players can pick to play right from the start: Mario, Donkey Kong, Link, Samus, Yoshi, Kirby, Fox, and Pikachu. While the remaining four expansion characters are Luigi, Captain Falcon, Ness, and Jigglypuff will be unlocked later if the player fulfills certain criteria set by the game.

Matches in the game will take place in a competitive play pattern on an elevated playing field. The main interface of the player will no longer have life bars like other classic games, but instead, will be numbers representing the percentage of damage. The higher the number is, the further the character kicks the opponent. And when a contestant falls off the ring, the game is over.

Super Smash Bros. is divided into two main gameplay styles: single-player and multiplayer method. In 1P mode, players will play against AI. Included in this feature are two minigames, “Break the Targets” and “Board the Platforms”. If players want to conduct training to improve their ability as well as to enter the fiery competition, then select “Training Mode.” With Versus Mode, the game supports up to 4P, allowing matches to be more diverse and stressful. The criterion for winning that game is based on the Time or Stock scale. The winner will be the survivor after the battle’s time runs out, or after the three other contestants fall.