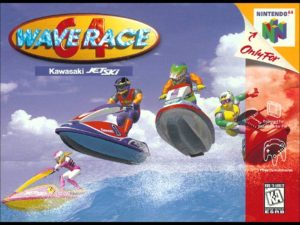 Wave Race 64 is a surfing sports game. The game was developed and published by Nintendo EAD and Nintendo, respectively. Throughout the game will be the surfing phase on the Jet Ski. Championship, Stunt Mode and Time Trials are three modes built into the single-player mode. The Championship is the main and most focused game mode with four levels of difficulty classified in order: normal, hard, expert, and reverse which require the player to go through times. in turn. Each level has a different number of courses. The starting level is normal there will be six courses, this number increases to seven when it reaches a difficult level, and eight is the number of courses of each expert mode and reversed. Stunt mode will be the place that requires players to perform difficult techniques such as jumping into the air and then going through large buoys so that they do not touch in a circle. Meanwhile, Time Trials will be a place for players to challenge themselves to set the records. The gameplay is not much different from the terrestrial racing game when it also has ranks, laps, velocity, and time. However, the context this time brings more summer colors with cool beaches, which is quite interested for players.

Batman Beyond – Return Of The Joker