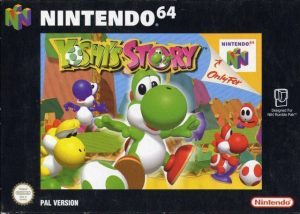 The adorable Yoshi dinosaur can now shine in his own game called Yoshi’s Story. This is the first version, in addition to Yoshi’s Island series, to have Yoshi as the main character. Yoshi’s Story is a platform game for Nintendo 64, developed and published by Nintendo EAD and Nintendo, respectively. Later, it was not until 2007 that this version was officially introduced into Virtual Console devices.

The background of this story still takes place in Yoshi’s Island. In particular, the Yoshis were living very peacefully and happily by the energy from the Super Happy Tree. However, this harmony ended when Baby Bowser discovered the source of that beautiful energy. Along with jealousy, Baby Bowser stole the magic tree and turned the entire island into a pop-up book. Little baby eggs hatch lovely Yoshis. After discovering what the island had suffered, they decided to find the Super Happy Tree again, through a journey ranged six pages of books.

If you already know the name “Super Mario World 2: Yoshi’s Island,” then this game has fairly familiar gameplay. If you have not known yet, then don’t just stop at this point.

The game has two main modes, Story Mode and Trial Mode. At the beginning of each game, players will have to choose a course, the Lucky Fruit, and one Yoshi with the color they want to play after selecting the mode. As for Trial Mode, players cannot choose a course, it will depend on unlocking it in Story Mode. However, regardless of modes, the goal will be about collecting 30 fruits to fill Fruit Frame. These fruits can be anywhere, in the sky, on the ground, inside bubbles, or even on the opponents’ bodies. If the player has a play strategy, such as collecting the fruits in a row or searching for Favorite Fruit, Lucky Fruit, then surely they will get higher bonus points. In addition, the game also contains many different secrets that are waiting for you to discover. The harder it is to find, the points in return will not be that low already.
In Story Mode, as mentioned, will include six pages of books that players need to pass on their own. However, the first four pages will be available, and the next two may have to wait for the player to unlock to conquer. The order of the book pages will be Beginning, Cavern, Summit, Jungle, Ocean, and Finale.