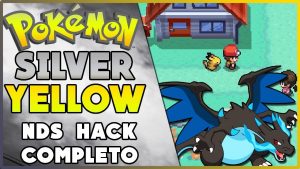 – Pikachu as a starter with edited move set and status
– Redesign of Kanto’s wild Pokémon
– Squirtle, Charmander and Bulbasaur obtainable through Pokémon Yellow events
– Primal Town and Team Rocket epic event
– God’s Garden as a new area
– Mega Charizard X instead of Y
– National Park with many different Pokémon
– Red as protagonist
– Mew, Deoxys, Jirachi, Suicune, Registeel, Regirock and Regice and much more catchable
– Blue is now at Mt. Silver with a team composed by some of his Pokémon of anime/games/manga
– The Pokémon who need to be traded to evolve can do it reaching level 36 or using the required item
– Wild Pokemon edited
– Trainers’ levels balanced
– Some Pokémon attacks edited (see the “read me”)
– Lucas (Platinum Hero) can be challenged at Victory Road
– Kanto starters (Blastoise, Charizard, and Venusaur) can now mega-evolve
– EV Training Road

– They are in the game but just for the Kanto starters
– They work as a new evolution and are reversible
– To know how to mega-evolve, defeat Lucas at Victory Road. He will tell you
– The move sets of Mega-Pokémon are similar (not equal) to 6th gen (see Bulbapedia)
– There is not Charizard Y in-game
– The Mega-Pokémon overworld sprites were not edited because in 6th gen they just appear in battles
– They are replaced with Uxie, Azelf, and Mesprit.