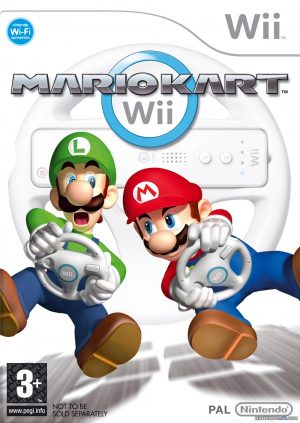 Mario Kart Wii is a racing simulation video game developed and released by Nintedo in 2008. The game is the 6th instalment in the Mario Kart game series. Like its predecessors, Mario Kart Wii is inspired by the characters in the classic Mario game. Players participate in 32 different races. Immediately after its launch, Mario Kart Wii became a phenomenon. It has become the 9th best-selling game of all time, the best in the Mario Kart series and the 2nd best selling on the Wii. Mario Kart Wii includes many different game modes, the most prominent of which are two modes: single-player and multiplayer. Friends who play with each other will connect via Nintendo Wi-Fi Connection that comes with the game purchase. In Mario Kart Wii, players will control Mario and participate in racing by car racing or bicycle (but the speed is not inferior to each other). On the track, you can perform a few tricks in driving to accelerate and attack, causing the racers to fall behind. In addition to eye-catching graphics, Mario Kart Wii also has diverse play modes, funny sounds … all of which have created the unexpected success of the game.