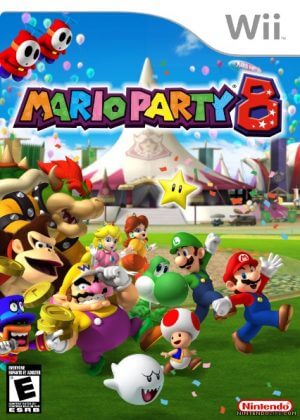 Mario Party 8 is a video game developed by Hudson Soft and released by the Nintendo family in 2007. The game is the 8th installment in the Mario Party game series. Like the previous sections, Mario Party 8 has four characters for players to choose during the game. Each screen will have four characters to participate in the competition; if no friends play with, the player can leave the computer to control the remaining three characters. The game has a lot of different game modes, but the most prominent is the minigame mode. In this mode, you are allowed to choose up to 8 different games. If you are the winner after a game, your achievement points will increase by 10 (achievement points help rank the players’ rankings with others). Before each level, if you choose a computer to control the remaining characters, the game will allow you to adjust the difficulty and handicap (the computer accepts some optional points). In addition, players can also choose the area of ​​the game screen, including five areas: Party Tent, Star Battle Arena, Minigame Tent, Extras Zone, and finally, the Fun Bazaar.