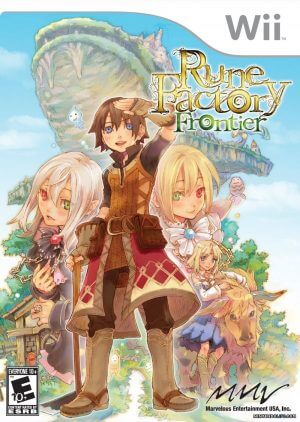 After the successes of the previous versions, Neverland continued to develop the third generation for the Rune Factory series called Rune Factory: Frontier. This version has the main character is Raguna. He was in the middle of finding the newly-moved neighbor named Mist. Also, ah also discovered the island while in the sky may fall into town. Regina needs to prevent this from happening. The game is divided into two parts: farm and dungeon crawling. In farm mode, players will own a farm that can be cultivated and farmed. The game also offers weather mode and four seasons of the year. During these seasons, there are three seasons that players can conveniently grow a variety of crops suitable for the weather. The harvested agricultural produce can be sold for gold. With dungeon crawling mode, you will enter four separate dungeons. Among them, the three dungeons will represent the four seasons of the year: spring, summer, autumn, and winter, with crops that will only survive when planted correctly. The remaining dungeon will represent Whale Island, which represents all four seasons and can be grown for all types. The game also provides a feature called Runey distribution. In this feature, Runey will have four variants: water, rocks, trees, and grass. Runes are the Trampoli ecosystem, so if Runeys disappears, the plants here will wither and grow slowly.

Sonic and the Secret Rings

Deal or No Deal