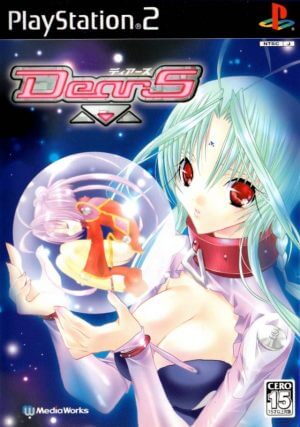 In the near future, a UFO crash in Tokyo reveals the existence of aliens to the world. The stranded aliens, who come to be known as DearS, look and act much like humans, but come from a very different society. Though contact with their homeworld is soon reestablished, many DearS remain on Earth, joining human society. DearS is a visual novel & relationship simulation game based on the manga created by Peach-Pit. The player is cast as high-school student Takeya Ikuhara, who until recently was living alone, but has had two young, female DearS move in with him: Ren and Tina, who view Takeya as their master. The game is broken up into days, with different actions and locations available depending on the time of day and the day of the week. The player must interact with different characters to proceed through the story and further the relationships with each character. In particular, Ren and Tina can be given both presents and orders — such as to cook dinner, or read a book — which will increase their attributes and their affection towards Takeya. Depending on the player's actions, different events will occur, and the ultimate goal is to reach each character's "good ending"