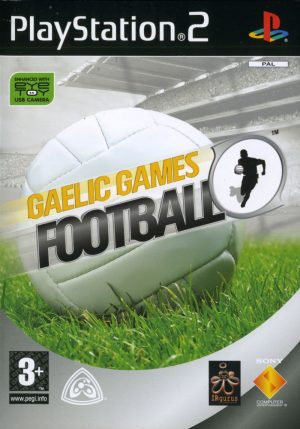 Gaelic football is a popular sport in Ireland. It's similar to soccer in so far as you got a goalie on each end, but it also has similarities with basketball since you can lift the ball off the ground with your hands, hand pass etc. Players will pass, kick and carry the ball up the other end of the field, and will attempt to score while attempting to dodge opponent players trying to gain possession of the ball. The goals are a bit different to soccer as well, the player can attempt to kick the ball past the goalie for higher points, but they can also kick the ball over the goalies head where the goalie can't defend for fewer points. The game itself has sponsorship from the Gaelic Athletes Association who owns all the rights to the team names and stadiums etc. The game did not however have sponsorship from the Gaelic Players Association who has the rights to the actual player names, so none of the official player names will feature in the game. All the team Guernseys appear in the game from 32 of the teams, plus New York. 11 stadiums feature in the game. 3 of the major competitions feature in the game. League which plays similar to soccer league in so far as you got 4 different divisions, teams move in between divisions depending how they do each year, and teams win for each division. Provincial, which features the 4 provinces in Ireland, teams from each province will battle it out against each other. Al Ireland, based on the performance of the Provincial matches, teams will battle it out against each other to find out who will win for all of Ireland. The game features full fixtures, that allow you to monitor how your team has been playing in the different competitions, and you'll also have the chance to trade/improve players at the end of the season.

Brothers in Arms – Road to Hill 30