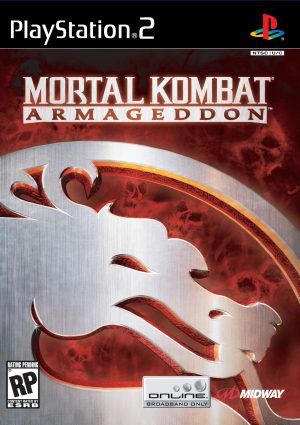 Mortal Kombat – Armageddon is a fighting game genre and is the seventh installment in the Mortal Kombat series, the series considered to be the best in the genre. The game developed by Midway, the game was first released on October 11, 2006. The plot revolves around the conflicts of the characters in the game and culminates in the great battle of Armageddon. Join the game, players can choose their favorite characters with the number of characters up to over 60, the largest number ever. Usually, each character will have two different types of fighting: using their hands or using weapons, with some exceptions such as Smoke and Mokap will have two types of fighting by hand instead of weapons. In addition to this part, you can create your own Fatality with a special key combination, Fatality moves are divided into eleven levels, creating high-level Fatality moves you will receive more koins and vice versa. In addition to playing pre-made characters, you can create your own character, the game gives you the ability to choose gender and classes for your character with more than 14 different classes like Humans, Black Dragon Members, Ninjas, etc. then engage in bloody battles.