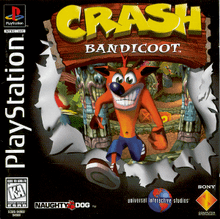 Crash Bandicoot is an action game developed by Naughty Dog. In 1996, Sony Computer Entertainment released the game on the PlayStation in North America. The game’s plot takes place in an archipelago in southeast Australia. This is where Dr. Neo Cortex and his assistant Dr. Nitrus Brio created a horrific experiment. They used a device called Evolvo-Ray to work on the different animals living on the island to turn them into beasts with superpowers to serve them. The crash was originally a gentle Bandicoot mouse but was captured by Vortex to test him to become the leader of the entire army created from this experiment. Two people will think Crash will obey, the experiment has turned him into a mighty and out of control animal. After trying to control Crash but without success, Cortex decided to release Crash. After Crash left, Cortex continued to prepare experiments on a Bandicoot mouse named Tawna. During their time in custody, Crash and Tawna became good friends. Crash decides to go back and defeat Professor Cortex to save his best friend.

Crash’s journey begins at the beach of N. Sanity Island. He must defeat every major foe including Papu Papu’s insane, muscular Koala Kong and Pinstripe Potoroo gangster. After getting into Cortex’s castle, his assistant Brio tried to prevent Crash from entering further. He sacrifices and uses chemicals to turn himself into a monster but still cannot stop Crash. The battle between Brio and Crash set the castle on fire. Cortex uses a hot air balloon to hide, but Crash catches it. Cortex tries to attack him with a plasma gun, but Crash manages to reach him and causes Cortex to fall from the sky. The story ends when Crash embraces Tawna while the two escape the burning castle with Cortex’s hot air balloon.
The game is divided into levels from easy to difficult. In each level, there will be random different types of barrels, most each contain one of the items such as Wumpa Fruit and Aku Aku masks. Collecting all three Wumpa masks will make Crash invincible in an instant. On the way there will be bottomless holes, falling there or being attacked by enemies, causing Crash to die and have to play again from the beginning. Players can control Crash to defeat enemies by jumping on them or using spinning attacks.