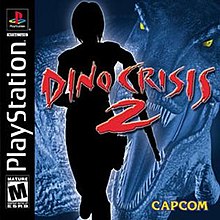 Dino Crisis 2 is a game of dramatic action-adventure genre in the Dino Crisis game series of the manufacturer Capcom. In this version, the game focuses on the battles between the US military against the sabotage of the tyrant dinosaurs. The player controls a dinosaur hunter with positioning devices. They use primary and secondary weapons to defeat the enemy. Some of the primary threats are rifles, flamethrowers, and shotguns. These guns create significant damage to the enemy to help players quickly destroy the enemy. Also, auxiliary weapons such as knives, smoke bombs, and grenades are used to surprise enemies. For each defeated dinosaur, the player receives extinction points. This point is considered as a particular currency for buying in-store items. The fully equipped things bring high power and ensure safety for players. Besides destroying dinosaurs, players will destroy many buildings to receive additional bonus points. After completing the main task, players experience the extended survival mode. This mode brings many unique and exciting challenges for them.