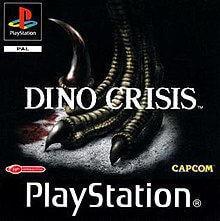 Dino Crisis is a survival horror game released for the PlayStation in 1999 by Capcom. The game revolves around the main character named Regina. He was an agent in an organization sent by the US government to a deserted island to investigate a research facility on it. Upon reaching the island, the organization discovered that the place was flooded with dinosaurs; they appeared everywhere. Our protagonist must group around the island to find a base to uncover secrets and will have to escape the bloodthirsty dinosaurs on the island. The basic abilities of a character include walking, running, pushing or moving objects, and climbing on them. On the screen, there will be a map showing the position of the player, destination, save point, and wing positions of each room’s locked in the base. The save points in each room are points to the next level and also the task of the player throughout the game. The player can open the locked doors by inserting the digital locking discs into the door. These disks decode and unlock the door. Also, there is a red laser beam system. When activated this system, will protect you from ferocious dinosaurs.