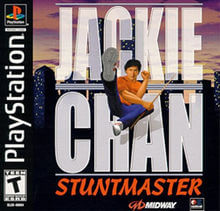 Jackie Chan Stuntmaster is an adventure action game developed and published by Radical Entertainment for PlayStation in 2000. The game is inspired by the real character Jackie Chan – a famous martial arts actor in Hong Kong. According to the game’s story, a bunch of mysterious people kidnapped Jackie Chan’s grandfather and they went to New York City. After learning the news, Jackie Chan went to New York City to rescue his grandfather and investigate the mystery surrounding these kidnappers. In New York City, Jackie Chan will face different challenges to rescue his grandfather. The game consists of 15 levels with increasing difficulty that players need to overcome. Players will also experience many parts of New York City including: waterfront, sewers, roofs, factories and streets. At the end of each level, the player will have to fight a boss. To reach the next level, players will have to defeat this boss.

Players will encounter animals throughout the game, it seems harmless to the character. When killing these animals, it will drop items that are a bowl of rice. This item will restore the character’s HP. You will face many different enemies including police, gangsters, bandits … In addition, you will face many of the pre-arranged pitfalls on the way. If you let the enemy touch you, then you will lose some HP depending on the strength of the enemy. However, you can destroy them using your character’s attacks. After defeating the enemy, they may drop blue orbs. These orbs help Jackie Chan increase his strength when he attacks enemies. In a map, you will be able to use a special skill to release a beam of light. When using this skill, all enemies will be destroyed in its path. You use it in a reasonable way to achieve the most effective. When you accumulate all 30 blue orbs, you will have 5 more times to use this special skill. Accumulate lots of times using this special skill, with this skill you will defeat the final boss at the end of each map more easily. If the character dies, all his orbs and powers will be lost. You will return to the first level at the map where your character has died. Players can also save their progress after passing a level