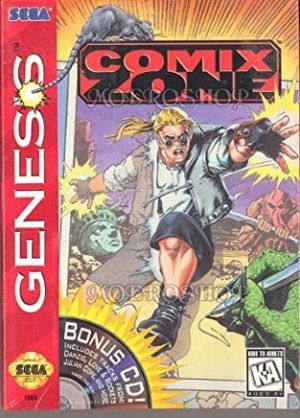 The story begins with protagonist Sketch Turner, an author of comic books. The work he is currently working on is called Comix Zone, which tells the story of the New World Empire’s war against alien invaders. On a stormy night, a lightning strike hits his site and causes Mortus’s villain in Turner’s book to appear, pushing him into the Comix Zone and creating enemies to kill Turner. As Turner, you will have to fight in a world that you create. In the boards of comic book pages, you will have to fight countless enemies. When destroying all enemies in one table, you will be able to move to other tables. There are many actions for you to destroy enemies such as punching, kicking and jumping, in addition to keeping up to three items to support combat such as bombs, knives, etc. You can also tear pages to throw at enemies and HP will drop if you do so. In addition to fighting the enemies, you also have to solve puzzles to be able to overcome the levels. If attacked by health ants exhausted or fall into the trap, the game will end, you will be wiped out and Mortus will replace you live in the real world.