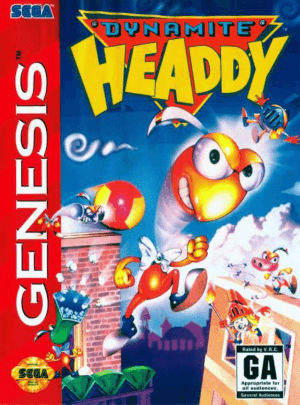 The story revolves around the main character Headdy, a puppet with a removable head. Headdy is on a journey to defeat the evil king King Dark Demon with the plot to turn all the other puppets into his minions and take over the world. As Headdy, your task is to overcome challenges, fight with the minions and finally defeat the King Dark Demon. The game has 2D side-scrolling gameplay, in your journey, you will encounter countless obstacles and enemies. Skillfully jumping over the terrain to avoid falling into deep holes, your weapon is the head used as a boomerang, using it to throw at enemies will help destroy them. During the game, there will be puppets shaped like a box containing symbols that appear randomly, attacking it will allow you to use special abilities for a short time or recover health. In the middle of the game, will have bosses appear, they will have their own fighting style and also weaknesses, but you must quickly find that weakness before they are destroyed. There is a reward screen that appears when you find the Liberty Head, where you will throw the basketball into the hoops to receive valuable items.