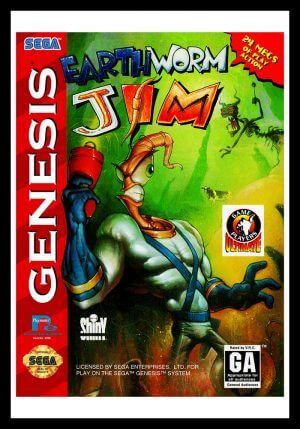 The story begins with Jim, an ordinary earthworm, but one day Jim finds a “super suit” and it changes his life. Using the suit, Jim can move like a normal person, with the head being earthworms and his body is made up of super suits. Play as Jim, you will have to fight the villains and those who want to get back the outfit, besides the most important task is to protect Princess What-Her-Name from them. With 2D side-scrolling platformer, you just have to avoid the pitfalls and kill the enemies at the same time. Your weapon is the head of the earthworm, you can use it as a whip to attack enemies or use it as a rope to swing through deep holes. Interspersed in the game screen you will encounter powerful bosses, quickly find their weaknesses before being defeated. In addition, you can also participate in the racing called “Andy Asteroids”, then you will sit on a rocket and dodge the meteors flying by. If you pass the challenge you will be taken to The next level, otherwise, you must destroy the bosses to be able to continue.