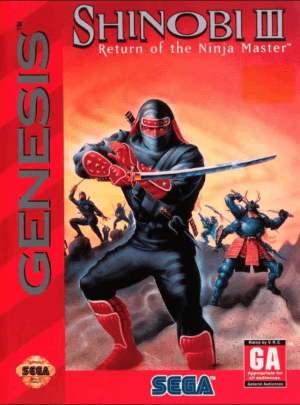 The story begins two years ago when the Shadow Master set out to invade the world. He created an organization of many evil ninjas named Neo Zeed to execute his conspiracy. At this time, Shinobi, a powerful ninja who was also the last to hold the power of Oboro Ninjutsu stood up and defeated them. The idea that Neo Zeed was destroyed forever but now they are rising strongly to carry out their conspiracy again. As Shinobi, you will have to fight alone with a powerful army of enemies. With a 2D graphics scrolling side, when fighting you can jump and kick at enemies or use weapons and throw at them, in addition, you also possess four powerful ninjutsu skills including creating lightning, a million revive fire dragons, speeding up and committing massive damage. There will be items scattered throughout the journey, each with their own effects, some giving you extra lives, some giving extra weapons. This section also gives Shinobi new possibilities: acrobatics in the air and jumping on walls. There are a number of extra screens that allow you to control the vehicles continuously moving, you have to avoid obstacles at the same time destroy the enemy at the same time.