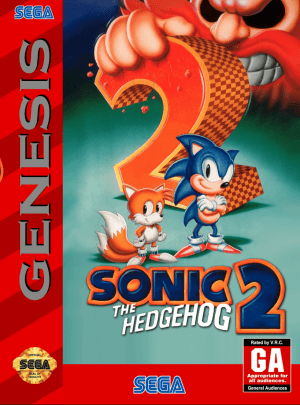 Following the success of the previous installment, this part gives players more exciting adventures and many improvements in graphics. The story revolves around the protagonist Sonic and his new friend Tails (a Sonic fan) in the journey against the plot to dominate the world of Dr. Ivo Robotnik. This time the crazy doctor intends to steal the Chaos Emeralds and use its power to power his new weapon called Death Egg. The gameplay of the game is basically the same as the previous one, but this game supports two players at the same time through two controllers and each will control a character. Characters will now have a new ability called “Super Dash Attack,” so that characters can curl up and hold their positions and then accelerate quickly. When an enemy attacks the ring you own will fall out, and when attacked without a ring you will lose a life. When you collect all 50 rings and go to the special stage you will be moved to a pipe, where you will be controlling the character with beautiful 3D graphics.