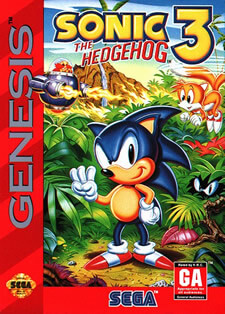 The story takes place after the events of Sonic the Hedgehog 2, at which time the Death Egg weapon of Dr. Robotnik was defeated by Sonic and landed on Angel Island, where he met Knuckles, the guardian of Master Emerald. The doctor now tells Knuckles that Sonic is the enemy and he is coming to steal Master Emerald. While Sonic arrives and fights Knuckles, Robotnik repairs the Death Egg and steals Master Emerald. Now Knuckles realized that he had been tricked and turned to fight with Robotnik to retrieve the treasure. Keeping the gameplay of the previous sections, when you start you can choose between two characters Sonic and Tails. In addition, the game also supports two players to cooperate and each one controls a character. In your journey, you have to overcome countless obstacles and deadly traps, you also have to fight the robots of the doctor. “Spin dash” helps characters have the ability to accelerate and kill enemies. The rings act as a life-saving item for the character when you are attacked or touched by traps the rings will disappear, and when attacked without a ring, the character will lose a life. Once you collect 50 rings and go to the checkpoint you will be taken to the special game screen.