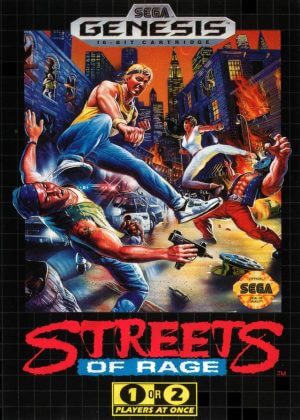 The story takes place in a fictional city, a criminal corporation that has long controlled the city making criminals go wild and the police divided into factions to help the criminals. The three young policemen have left their forces to stand up against them all in order to bring peace back to the violent world. Join the game you can choose between three characters Adam Hunter (a strong boxer), Axel Stone (an expert martial artist) and Blaze Fielding (a top judo fighter). In addition, the game also allows up to two players can work together and each player controls a character. With side-scrolling 2D graphics, enemies can appear from both sides and you’ll have to fight them all at the same time. In addition to using martial arts skills, you can also use a variety of weapons dropped from enemies to throw at them. You also have to avoid the deep holes and traps that appear scattered, you can even push enemies into the traps to deal damage to them. You can also call for assistance from other police, they use a gun that fires explosives and deals tremendous damage to all enemies that are appearing.