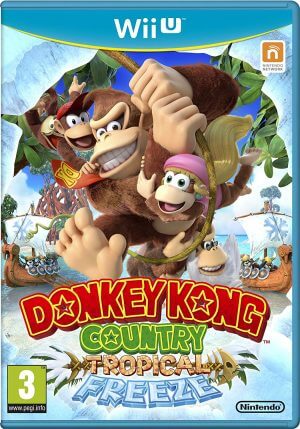 “Donkey Kong Country: Tropical Freeze” is a side-scrolling platformer game developed by Retro Studios with support for Monster Games. This is the 6th version of the “Donkey Kong Country” series released by Nintendo in February 2014. Following the success of “Donkey Kong Country Returns”, the game has brought players many new experiences with many Attractive features, engaging storyline, vivid and eye-catching graphics. The story of “Donkey Kong Country: Tropical Freeze” revolves around the tropical paradise of the Donkey Kong family being invaded by the Northern penguins, freezing the entire island. Players will experience many types of terrain throughout the game. In the game, players will have the opportunity to experience extremely unexpected and logical environmental changes, such as moving from old forests to ancient ruins in forests, or underground bases full of traps. The game continues the classic side-scrolling platformer of the “Donkey Kong Country” series. The player will be accompanied by the character Donkey Kong and his friends travel through ten different islands to defeat the Snowmads. The control system is similar to the previous game, with the player controlling Donkey Kong picking up items from the ground and throwing them at a stunned enemy, and various controllers can be used with customizable controls.