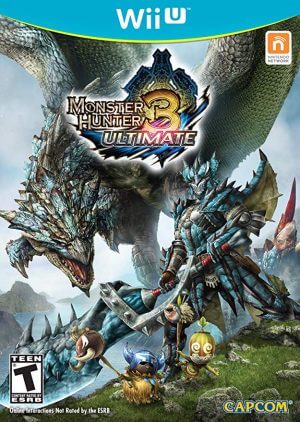 “Monster Hunter 3 Ultimate” is an extremely popular action role-playing game from the famous game brand in the world, “Monster Hunter”. The game was developed and published by the hit game company Capcom on March 19, 2013. This is an expanded version of the game “Monster Hunter Tri” with more features and improved game graphics, giving players a great experience. With the appearance of G rank, the highest rank in the game, bringing players to participate in the extreme challenges of the game, giant bosses need only a few attacks to kill the hunter, as well as the appearance of many G-rank-only bosses and know what is “1-hit-KO”. The character customization system is also very diverse with 12 different weapon classes including Sword and Shield, Dual Blades, Great Sword, Hammer, Bowguns (Light and Heavy), Bow, Gunlance, Lance, Longsword, Hunting Horn and Switch Axe weapons, which can switch between Axe and Sword forms, each weapon has different advantages. “Monster Hunter 3 Ultimate” reintroduces the underwater battle to be excluded from the Tri-only Japanese sequel, “Monster Hunter Portable 3rd”. This is the first time the gunlance, bow, hunting horn and dual swords have appeared in underwater combat. Players will play the role of a monster hunter with the main task that is hunting monsters, finding materials, upgrading weapons, armor, promotions to continue the cycle with stronger monsters.