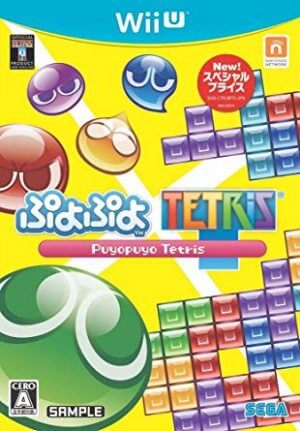 “Puyo Puyo Tetris” is a puzzle game developed by Sonic Team and published by Sega on various platforms. The game is also a crossover version between the “Puyo Puyo” series and the “Tetris” franchise, giving players a variety of game modes that combine both aspects. The game consists of characters modeled after seven Tetrominos, which are different pieces made up of four blocks. The gameplay in the game revolves around a combination of both the main styles of “Puyo” and “Tetris”. In the “Puyo Puyo” style, colored blobs known as Puyos will fall from the top of the screen and can be rotated before being placed down. The Puyos can be popped by matching four and more of the same color next to each other. By carefully arranging the Puyos, players can perform chain combos in which additional Puyos are matched and popped as they fall into place, earning more points as a result. On the other hand, The “Tetris” style has players placing shaped blocks known as Tetriminoes down on the playing field. Successfully filling a complete horizontal line of blocks on the field will make it disappear, and additional points can be earned clearing multiple lines at once. In either style, the game ends if Puyos or Tetriminoes pile up over the top of the playing field.

edgar
how do I get to install it. I am currently using haxi patch and I got no clue could you guys help me out.
Reply - February 18, 2020