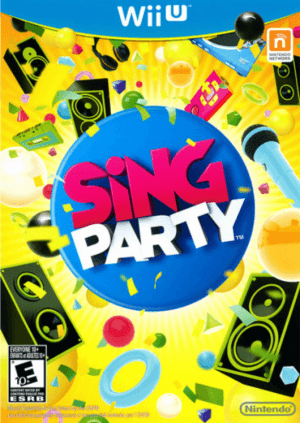 “SiNG Party” is an extremely attractive music/party game from the developer FreeStyleGames and released by Nintendo for Wii U. For the first time in January 2013, The game has been enthusiastically received from many players around the world when it gives players the feeling of showing their singing talent with friends and relatives. Like other karaoke games, players will sing along with the lyrics of the songs available and get points based on their rhythms, but “Sing Party” also allows multiple players to sing along with the main vocalist. The game includes many different game modes. In Party Mode, the lead singers read the lyrics on the Wii U GamePad, allowing them to face other players, representing the lead singer’s audience, and the lead singles moving around the room instead of staring at a television screen. Other players joined the fun by watching the signals from the lead singer’s physical performances, singing the background vocals and dancing along with the movements shown on the TV screen. In Sing mode, players can sing by themselves or as a duet with harmonies. As the song is performed, their vocal qualities are scored and evaluated on the TV in real-time. In Team Mode, players can split into two groups, which lets players face off against their musical rivals as they rotate through different game modes. The list of songs in the game has more than 50 different songs, allowing players to freely choose their favorite song.