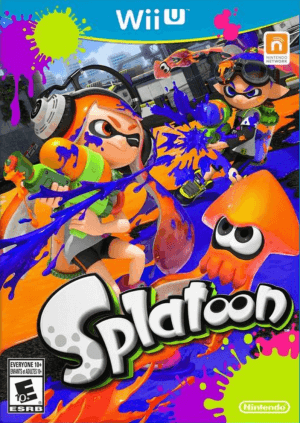 “Splatoon” is a third-person shooter game loved by many players with creativity in terms of gameplay as well as colorful and attractive character designs. Developed and published exclusively by the famous Nintendo game company, the game quickly created its own brand when it impressed all players around the world. The game has received a lot of positive reviews from game critics, many praising Nintendo’s decision to enter the genre with a new franchise, the game’s overall style, and presentation, gameplay mechanics and soundtrack are presented in the game. Players will focus on fictional characters in the game called Inklings, humanoid squid that can change between human form and cephalopod, and have the ability to hide or swim through colored ink sprayed on its surfaces with weapons such as gun, bucket, umbrella, roller, or paintbrush. In human form, Inklings can shoot ink according to their team’s color, can be used to hide in the surroundings or “spleen” opponents or enemies. Turning into a squid allows players to swim through their own colored ink, even onto walls and through nets, hide from enemies and replenish the ink supply in the process. In contrast, the enemy’s squid is much slower when moving in human form, unable to glide in ink form and gradually dealing with damage. In addition, “Splatoon” also adds a number of attractive game modes, including four-on-four online multiplayer mode, and single-player campaign mode.