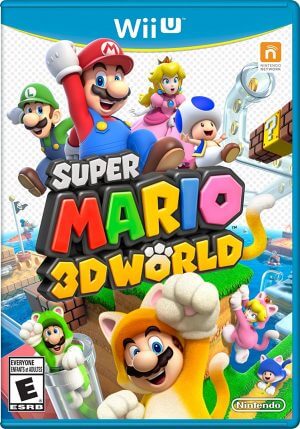 “Super Mario 3D World” is a very popular 3D platform game in the cult series “Super Mario”. Developed and published by Nintendo, the game quickly captured the hearts of many long-time fans of the series when players experienced the game with sharp and beautiful 3D graphics. This is the sixth installment in the series and a sequel to the popular “Super Mario 3D Land” game on the Nintendo 3DS in 2011. The game was critically acclaimed for its graphic design, submission, performance, replay value, and background music are all extremely detailed, making the player feel nostalgic and full of delight when enjoying a super product on the unique 3D graphics. The levels of the game follow the same playing style as “Super Mario 3D Land”, which combines the free-roaming gameplay of “3D Super Mario” games with the mechanics of 2D side-scrolling platforming games in the series, including a flagpole and timer in the levels. Players will be able to choose one of four playable characters, including Mario, Luigi, Princess Peach, and Toad. In addition, Rosalina appears as a playable, unlockable fifth character. Similar to their appearance in “Super Mario Bros 2”, each character possesses different abilities and controls. Mario has a balance between running speed and high jumping ability; Luigi jumps higher and falls slower, but has lower traction; Peach can jump and fly fast in the air, but runs slowly; Toad runs fastest, but cannot jump higher and fall faster; and Rosalina can use the spin attack as seen in “Super Mario Galaxy”, but has the slowest running speed.