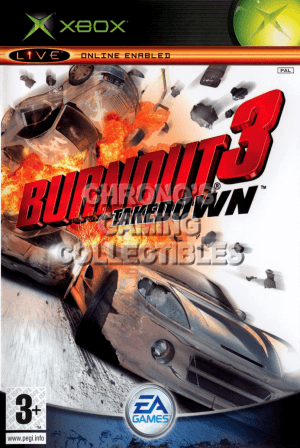 Burnout 3: Takedown is a racing video game, brought to fans by Electronic Arts in 2004. The game is the third version of the popular Burnout racing game series. This version is added with acceleration tools on the track, helping your car accelerate suddenly, creating a breakthrough in the racetrack. In addition, players can also attack opponents to eliminate them from the track. Burnout 3: Takedown has both single-player and multiplayer modes. In single-player mode, the player will have to fight five other AI-controlled opponents in multiple races. For Burnout 3: Takedown, the most important thing in a race is the recklessness, courage, and skill of the player. If the player collects instant acceleration items, this is really a great advantage. In addition to the two main game modes, Burnout 3: Takedown also owns 5 other new modes, the most typical are World Tour and Road Rage. In multiplayer mode, the game also supports split-screen and online game mode through an Internet connection. With 3D graphics, along with extremely small details designed by the developer in extremely detailed, Burnout 3: Takedown also owns great sound. If you are a fan of adventure racing, then Burnout 3: Takedown is definitely an option not to be missed.