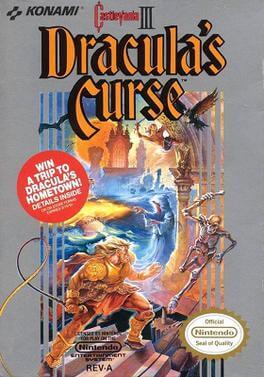 Following the success of previous releases, Castlevania III: Dracula’s Curse continues to be a Nintendo-released game in the Castlevania video game series. The game is set in 1476, 215 years before the events in Castlevania and Castlevania II: Simon’s Quest. In 1476, Count Dracula brought an army of monsters to Europe with the aim of destroying humanity. In response to this situation, the church requested help from the Vampire Killer Whip. For centuries, this clan was expelled from the land because people feared their powerful supernatural powers. Trevor Belmont – the current ruler of Vampire Killer Whip, has accepted the task of destroying Dracula in the situation that Europe is in danger of being destroyed. Trevor and his friends cross the Transylvanian countryside, defeating Dracula’s henchman and finally defeating Dracula. Once Dracula-dad of Alucard is defeated, he will fall into a strange sleep and cannot recall fighting his father. Grant Dynasty oversees the restoration of Wallachia city after the battle is over. Trevor Belmont and Sypha Belnades married when peace was restored in the region.

Unlike previous versions of Castlevania, in Castlevania III: Dracula’s Curse, the main character, Trevor can be supported by teammates. Accompanying Belmont in the journey is Sypha Belnades, a young witch with strong elemental magic power. Grant Dynasty, a pirate capable of climbing on walls and changing directions while jumping. And Alucard is the son of Dracula, a character with the ability to shoot fireballs and turn into a bat. Trevor – the main character in the game possesses great power from the laser beam. The player’s task is to control Trevor with one of his three friends to destroy Dracula.

Players will go through 2 main routes and 16 consecutive stages to complete the mission. In stage 2, Trevor embarks on a random journey to select one of his three companions. Players will find Trevor’s companion at the beginning of phase 3. Case 1, Trevor crosses the lake to the main bridge and into Dracula’s castle. In case 2, the player will go through underground tunnels and caves. At the end of case 2, the player will expand the cliff below the castle with more complex terrain that is considered more difficult for the player. After overcoming all dangers along the way, Trevor and his companions attacked and destroyed Dracula to bring peace to Europe.