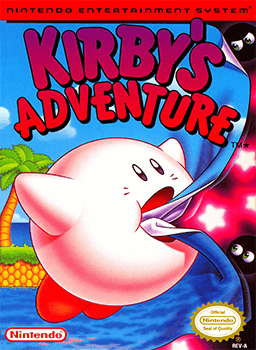 Kirby’s Adventure is a platform game released by Nintendo in 1993. The game uses the same design as Kirby’s Dream Land, a part of the Kirby series. After waking up, Kirby goes to the Dream Land fountain to investigate. He discovers that King Dedede stole the Star Rod, the source of the power of the Fountain of Dreams, and broke it into seven pieces. King Dedede’s allies are Whispy Woods, Paint Roller, Mr. Shine – Mr. Bright, Kracko, Heavy Mole, and Meta Knight are tasked with storing 6 fragments. He will keep the last fragment. All residents of the Dream Land become restless and cannot enter the dream because the Star Rod is destroyed. Kirby decides to track down the pieces of the Star Rod from the enemy and take them back to the Fountain of Dreams to restore everyone’s dreams.

On his journey, Kirby travels through seven worlds, traversing rough terrain and fights enemies to collect the seven fragments of the Star Rod. After defeating King Dedede, Kirby restores the Star Rod and places it back in the Fountain of Dreams. However, there was a dark source of energy covering the sky when Nightmare – a dark creature appeared from the fountain. Kirby discovers the truth behind the story: Nightmare ruined the fountain, and King Dedede removed the Star Rod, breaking up the debris on Dream Land with the intention of protecting this beautiful land. Nightmare quickly flew into space. Not letting it escape, King Dedede used his power to push Kirby and Star Rod into the air to attack Nightmare. Completing the mission to destroy Nightmare, Kirby and the Star Rod comes back to the Dream Land.

The game is developed based on the existing storyline. Players will control Kirby to join the journey in the Dream Land to repair the Star Rod after being broken by King Dedede and destroy the destroyer of the fountain. The game consists of 41 levels and seven major worlds. Kirby can walk, run, jump, and he can attack and dodge enemies by sliding. In each normal level, have to attack opponents on the road before destroying the Boss at the end of each level. When defeating the final boss, the player will move to another world through a Warp Star door. If Kirby touches an enemy or a dangerous object, he will lose part of his life. Kirby can touch or eat foods to replenish health or gain temporary immortality. Each world will have some special areas such as small game areas, players can earn more lives here. Museum area, allowing Kirby to gain a certain power. And Arenas, where Kirby must fight the Boss to gain items to increase HP. Players will copy the special ability of the Boss after it is destroyed.