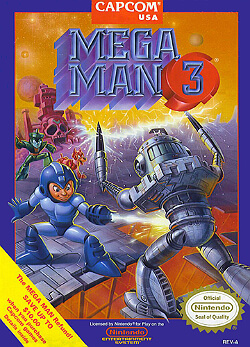 In 1990, Mega Man 3 was released. In this version, players will be involved in fighting with more challenge. Eight bosses with different offensive and defensive skills have been prepared for you to defeat. Besides being fought with many bosses, this version is designed with a new feature. It allows Mega Man to slide along the way to evade attack skills from enemies or overcome lowly arranged barriers.

Before starting the game, you must choose 1 of 8 bosses to fight. Each in them will bring a separate level for you to overcome. The bosses you need to destroy include: Shadow Man, Hard Man, Snake Man, Needle Man, Top Man, Magnet Man, Spark Man, and Gemini Man. Besides, each boss will own a special weapon. After defeating the boss, you can collect their weapons. In particular, each boss will have a unique weakness and can be defeated by the weapons of the other Robot Masters. Therefore, collecting weapons that dropped from bosses is very important. From there, you can defeat the Robot Master more easily.

To get to the position of Robot Master, you need to overcome many enemies and pitfalls. You will use the Blaster to destroy the enemies that appear along the way. With 8 different bosses, you have the opportunity to fight and overcome many interesting map systems. In addition face to face enemy, you also have to collect items to enhance the character’s power. For example, collecting special ammo allows you to use new weapons and can defeat enemies quickly or you can collect energy blocks to restore health to Mega Man.

After defeating a number of Robot Master, Megan Man can unlock some new features for the robot dog Rush. Unlocking a new feature for the Rush robot makes it easy for Mega Man to overcome many dangerous traps. Robot Rush can transform in many different forms such as Rush Coil, Rush Jet, and Rush Marine. With Rush Coil, Mega Man can jump further and overcome gaps of wide dimensions. And Rush Jet allows Mega Man to fly in the air. Finally, Mega Man can move underwater when using the Rush Marine. Besides fighting bosses at the end of each level, you also have to fight Protoman regularly. Defeating Proto Man helps you open up new paths and conquer many other fascinating challenges of the game.